skip to main | skip to sidebar

1.) Tell us a little bit about yourself.
I grow up most of my life in Rome, Italy, and was happy to be exposed to Michelangelo paintings and Caravaggio exhibits everywhere… so in the free times I was going to copy these masterpieces in Sistine chapel to in the street of Rome. Soccer and swimming was my second passion.. If I wasn't drawing I was playing one of these sports…

When I was 16 years old, ( as I was study architecture) a friend of mine discovered an article that mentioned that Disney in Milan was looking for new talent and had invited anybody to submit some drawings. From that moment I started to draw Mickey Mouse and Donald Duck every day, literally from morning until night. I sent in my artwork and just few weeks later I received a letter from them asking me if I was interested in visiting their studio, which I framed and have kept hanging in my parents’ house. The day that I read that letter, and the day when I entered the Disney studio, will be forever sealed in my heart. The director, a really charming gentleman, showed me the studio and alleys where there were framed pictures of himself with Walt Disney. He brought me to a room where all the comic artists were drawing and introduced me: This is Angelo, he will be the youngest comic-strip artist working for us.“Words that recharged me and motivated me then and still today, pushing me more and more to improve this God-given gift.”

In the meantime, I started working as an illustrator for some magazines in Italy and other places throughout Europe, but my main objective was to go to the USA and graduate from CalArts. I had to go through a year of mandatory military service, but finally, with the consent of my parents, I left for the USA. I passed the language exam and was accepted to Calarts, but due to an accidental miscalcuation of dates, my entry would have to be for the following year. I decided not to wait and went to Sheridan College in Canada instead.

Dreamworks made me an offer right out of school, but they kept postponing my moving day, for more then 6 months, due to change of plans for the movie, go from 2D to 3D. I remained in Canada and, seven years later I gained citizenship. While in Canada, I had the opportunity of working on well-known movies one of them was "Triplets of Belleville"and after receiving citizenship I was hired by the California company Rhythm & Hues, that recently had won an Oscar for the movie “The Golden Compass” and had finished “Alvin”, a box-office hit around the world. Now I have started another adventure in Florida with Digital Domain's new animation studio. 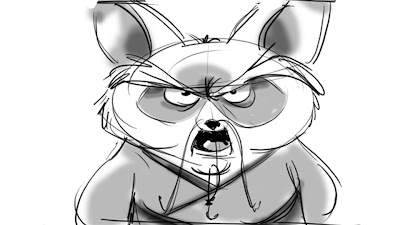 2.) When did you realize that you wanted to pursue a career in art/animation?
I was 8…After I saw the movie Cinderella on the movie theater something hit me..particularly was the scene with Cinderella and the mouse and birds that helped her all together to make her dress… I loved the fact that Walt Disney was using this animated movies to give us this nice values of friendship values… back then I was quite advance on my drawing skills.. I was already drawing portrait when all my classmates were still doing the stick figure drawing…So I thought I want give back what Walt Disney give to me when I was big… hehehe... Since then my focus was to work in animation.. And I started to do research to how to do animation and how to get to work for Walt Disney. 3.) Can you list some of the films you've worked on?
Sure. I have worked on Everyone's Hero, Triplets of Belleville, Ice Princess, Tarzan 2, Alvin and the Chipmunks, 9, Kung Fu Panda, Dorothy of Oz, and most recently the Legend of Tembo at Digital Domain Tradition studios. I've also done a lot of TV and commercial work. 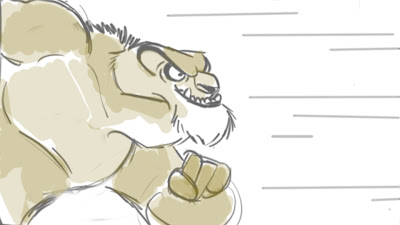 4.) You have a pretty impressive resume of films you've worked on. What was it like traveling to different countries to work on these projects? Is there a difference in the "studio culture" from country to country?
Yes there is a big difference… the style of life and culture effect drastically to how well or how bad a company is. For example.. In italy, it will be hard to have a good animation studio because, even if their artistic skills are way above the one I found here ( because since childhood we are expose to art , paint and sculptures in every corners) and same the one that people in french or spain has, there is no way that people will work that many hours since they are really attached to their siesta time and so to their walk to the main street at 6 pm with their friends and same to the dinner time with family. In canada I found lots great artist due for the multicultural society that brings a nice mix of styles but the country is too conservative and they are not investing to their product or them self as much American do… Here in the USA people really believe to their industry and so they are willing to take risk and that way the capital of movie is here… in this business you need to invest money to gain money… 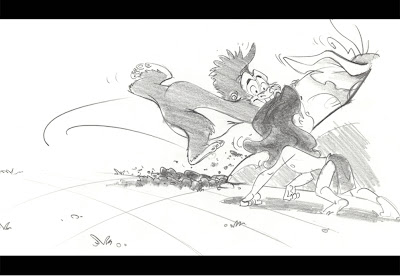 5.) What inspires you as an artist?
I think I will be an ethereal kid…and I keep that enthusiasm I have on drawing since when I was little and I think is a positive energy and I ma fear that by acting like an adult I will lose it, and so loose the positive and happiness inside my self… I try to see everything like the first time I sow them …and look and learn as much I can from it

The sentence : "More you know and more you know that you don’t know", or the one "Think about your self like an empty glass" so every time someone teach you something you can fill it up to the max of your capacity are sentence carved on my believes… every time I see a new artist I want copy and learn from him… and doing that I realize how much I don’t know and how much there is to learn and so to grow.. And when I hear other artist or some my ex students acting like they know or that they are the best.. It make me laugh and give me the good bust cause I know that, even if they are good, they stopped to learn and I can soon reach them and get better then them... Just matter of time :)

6.) If you weren't making movies for a living, what would you be doing?
Probably make inventions.. I wish sometimes I was born in Leonardo da Vinci area so I could study anatomy…paint, building new cutting edge strucion/building or invention…I know it might sound silly but back then an artist was really respected and tread like a king…Art one at the same level or better then all the other discipline…medical, lawyer etc.. Back then there was not many school and the school system in art was simple.. One master take just one kid under his wing there for you were more unique.. Today there are thousand school and so thousand grays area and everybody thinks that is an artist, and that lower down your value as an artist… "so you are an artist? My daughter is an artist too " 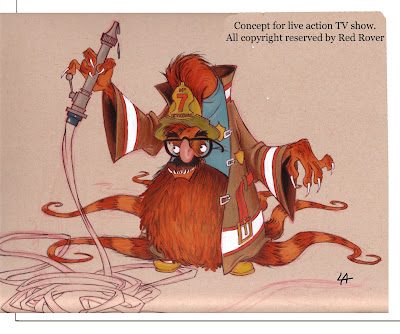 7.) Do you have any tips for aspiring young artists in animation?
One thing I used say always to my students… learn from other artist the structure and keep your style…you can be who you want to be.. Its tough out there but if you work hard and you keep pushing and get up every time you feel down you will be able to make it and be the artist you want to be…
And its true.. It was extremely hard for me to be where I am now… move to a new country.. Be for more then 15 years away from my culture and family.. Had to start all alover over and over since no one knew the companies I worked in the previous country.. Learn a new language…be used from some company since they know they got you from the visa and you stock with them so they can ask you to do more work and get pay way lees… but it is all worth it when things coming along together. How many times I thought to quit… and just to go back and become a lawyer or a doctor like most my family are and have the safe job… you have no idea… but I am a fighter and I believe to make good heart can enrich people and make probably one kid look my animated movie one day and say.. I want give it back to other kids what Angelo gave to me with this movie… 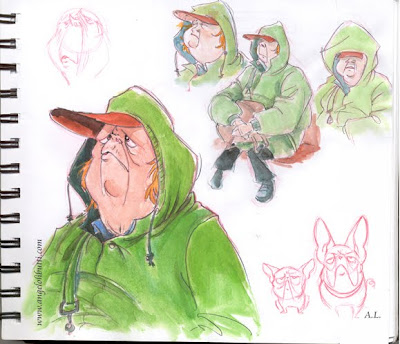 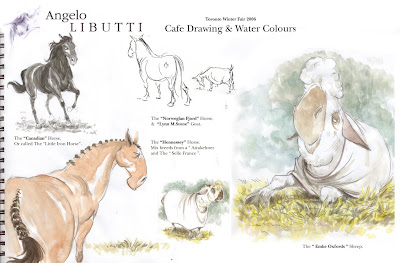 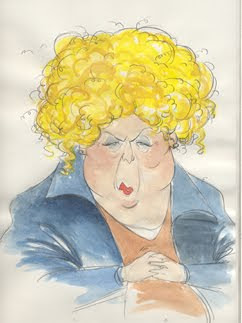 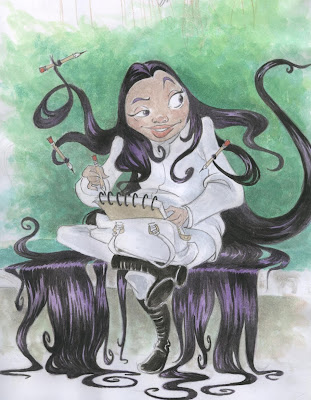 TO SEE MORE OF ANGELO'S WORK, VISIT HIS PERSONAL WEBSITE
Posted by Betsy Bauer at 6:06 AM 1 comment:

Some Changes Around Here!

It has been a while since a post on this blog! Apologies for that. Since most of the participants of this blog are Ringling students, you understand how busy things can get during the school year! However, after now graduating and working full time at Digital Domain's Tradition Feature Animation studios, I now find myself with time and a desire to give back. Since most students are too busy to complete character design challenges during the school year, I thought of another way to revamp this blog--interviews with talented artists already working in the film industry. 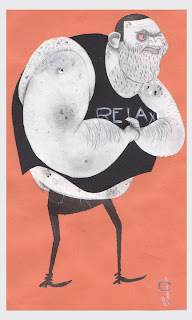 Sorry for the super late post, I don't have any internet right now. 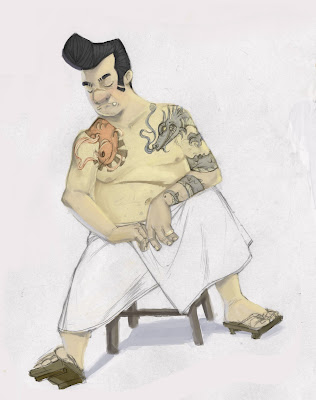 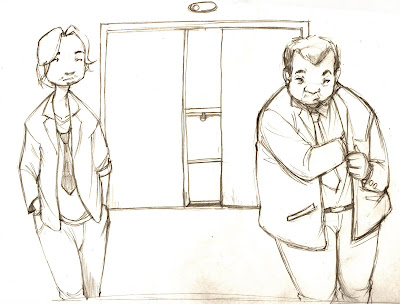 Not much time for this one... Yakuza leader and his body guards.
-yates
Posted by Michael Yates at 10:17 PM 1 comment:

Got a little carried away with this one, it was just so much fun! :)

I went in to school to help my mom set up her classroom. This is what I did between moving furniture and putting up alphabet charts. 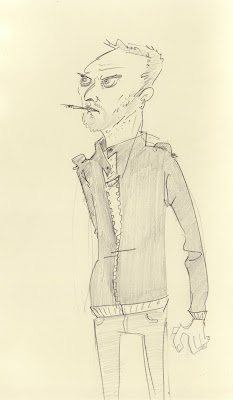 The first dude was my favorite, so I ended up drawing him. 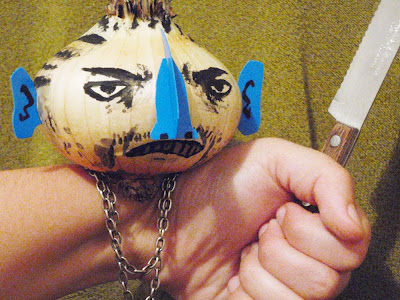 And this is the guy I had been waiting to do since morning. Cut him and he'll make you cry.

Sorry for all of the spam, everyone. I have deleted the two spam posts, and have been moderating the comments before they are posted so that we stop having links to viruses.

Hope you guys are having fun on the latest prompt!